Right, well I’ve been busy sewing up a storm this month, but all on one project which I’m doing to an insanely fine finish. French seams galore! And I’m still not quite finished!

Anyway, luckily I have a few of last month’s makes to share with you still, and here’s one I had the foresight to do the pics for when I wore it for the first time, at the very end of Me Made May. Unfortunately neither me nor my photographer noticed I had a twisted strap (curse you, Andy!) and we haven’t had a chance to redo the pics yet. But I’m sharing them anyway because I’m sure you all have the imagination to picture what that strap would look like if it wasn’t twisted. Pretty much the same as the other one, in case you need any help 😛

The Cleo Pinafore and Dungaree Dress from Tilly and the Buttons. I made the knee length version and used two back pockets and one on the bib.

As last time, I graded between a 3 at the waist to a 4 at the hip. That proved to be a smidge too tight with my first version, but with the stretch denim was perfect. I did stick to my 1cm seam allowances for the side seams, but might not have needed to after all.

A star print, indigo lightweight stretch denim I bought a few years back at Fashion Fabrics in Bath. I honestly can’t remember much about it in terms of price or fibre content, but I can see what looks like the same fabric here at myfabrics.co.uk. I think I must have bought it to make a midi skirt with, as I had just one metre.

You can find all my notes about the construction in my first Cleo post, and I did pretty much the same this time around (along with staystitching those curved edges like I wished I had last time!). The only real difference was that this denim frays like a bastard, so I used my pinking shears to finish off the raw edges on the insides of the pockets and the seam allowances under the facings.

Unlike my first experience with contrast topstitching, this went like an absolute dream! Denim is so much easier to get a good straight line on than needlecord, and I really enjoyed the whole process. I can see me getting more adventurous with topstitching in the future. Top tip: use a 1/4″ patchwork foot if you have one. I found it much easier to line up using that than my regular presser foot.

I’m loving my latest Cleo every bit as much as the first! It’s a perfect weight for spring/summer, and the lack of a waistband helps you feel cool in the heat. It’s also great for concealing the occasional bloated tummy so I reckon I’ll take it with me on holiday as I might well indulge in a bit of bread and pasta then.

Considering it’s reasonably roomy at the waist, this dress still manages to look quite slim and shapely. I think it could be the perfect dress. At first I was a little worried that the star print denim was a bit… infantile? But I reckon the stars look like polka dots from a distance, and anyway, who cares if it is?! I could also do American flag fancy dress pretty easily by wearing a red and white striped tee underneath. Should I ever want to dress up like the star spangled banner. Given the current president, no way! 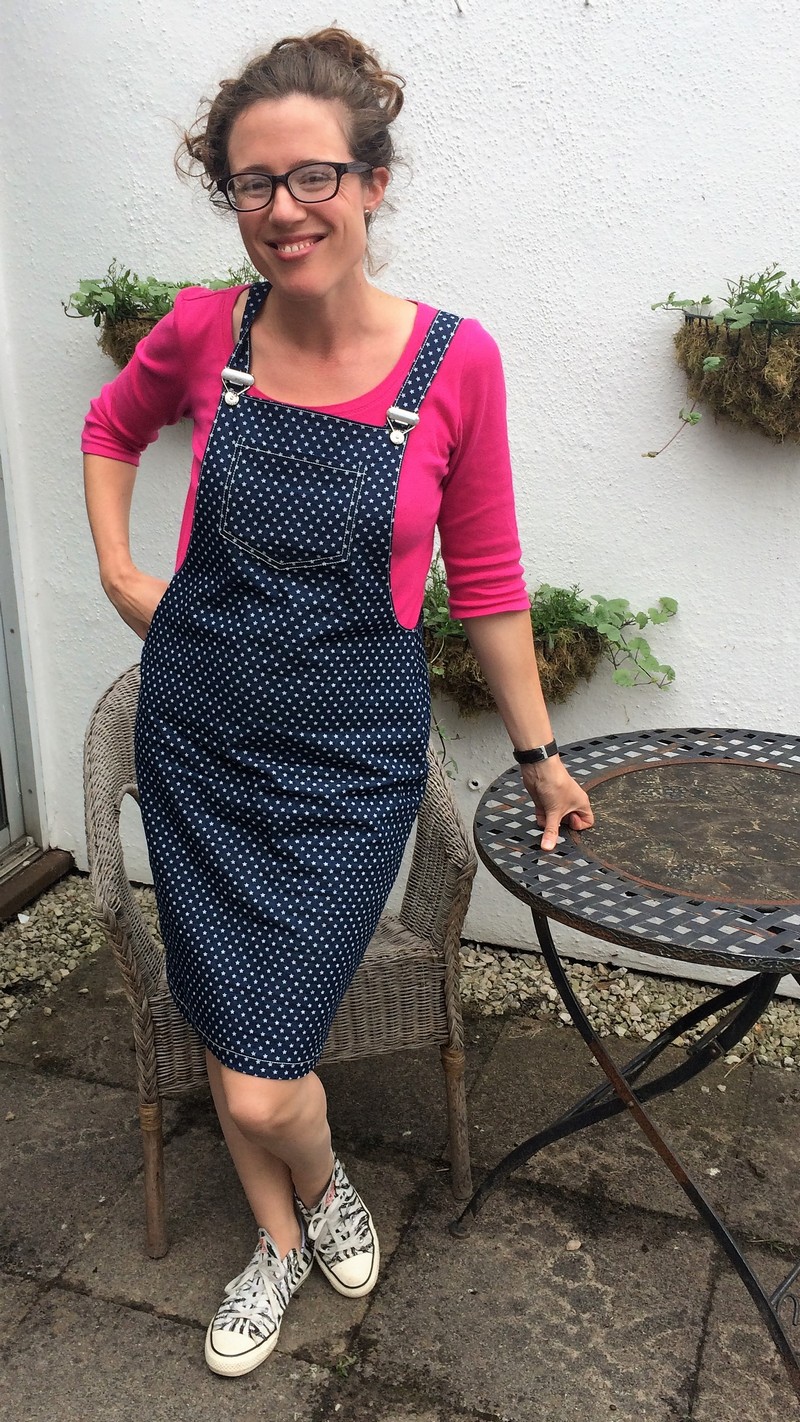 I’m really pleased to have a TNT dress pattern under my belt at last. Now I just need to make more tops to go under my Cleos. Or buy some. It’s still okay to buy clothes sometimes, isn’t it? 🙂

I will definitely make this dress again, probably in a solid black stretch twill next time. I think I will add the centre seams back in again for any versions with contrast topstitching as it just looks better that way.

I’m guessing I paid around £10-£12 for the metre. The facing fabric was scraps from the stash.

£5.98 for the dungaree buckles. All thread and interfacing from stash.

I think that’s a pretty good price for this dress. It’s never going to come out incredibly cheap because it needs a decent weight fabric and I’ve fallen for the Prym buckles and don’t want to use anything cheaper!

One last pic, where I was photobombed by Gabriel. Who doesn’t appear to be wearing any pants! That’s pants in the American and the British sense, by the way 😛

Have you made a Cleo yet? And what tops would you wear under a star print denim dungaree dress? Seriously, I need ideas!