Please look away now if you’re getting sick of various iterations of the Knit Sweetheart Top from Gertie Sews Vintage Casual, as this is my third version. I reckon it’s a good’un, though! 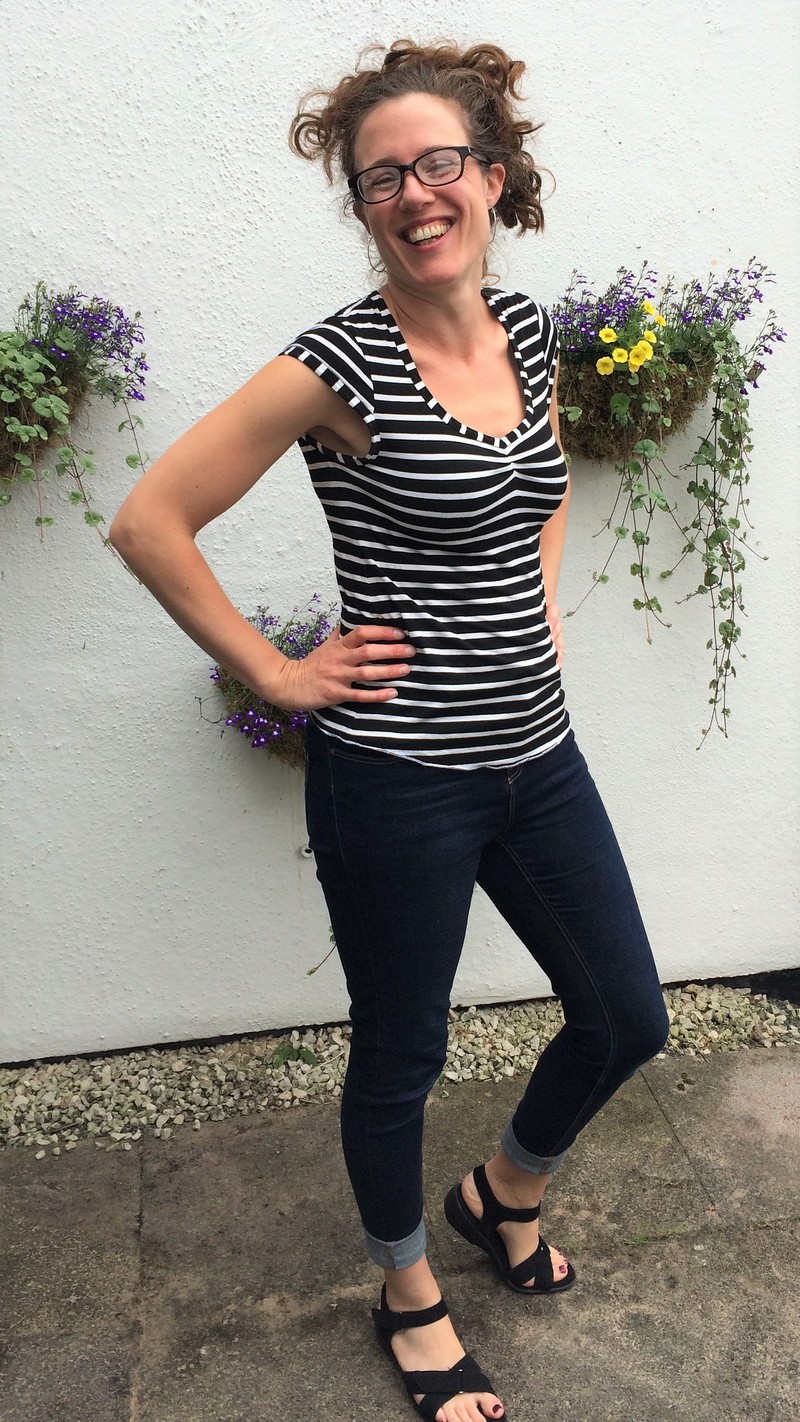 This is my third go at the Knit Sweetheart Top from Gertie Sews Vintage Casual. I’ve already made a sleeveless version in black jersey and hacked it into a maxi dress. This is the first time I’ve made a cap sleeve version, though.

It’s a black and white striped lightweight viscose jersey (97% viscose, 3% elastane) from Ditto Fabrics. I only bought it a few months ago but it’s out of stock now, so no linkies. Sorry. It’s a really fluid, drapey jersey with okay, but not brilliant, recovery.

I made this tee at the same time as the maxi dress version of the pattern, swapping between the two somewhat haphazardly. As a consequence this top benefitted from some of the lessons learned from that one, and vice versa.

I had a few issues while sewing this up, first of which was the quantity of fabric ordered. I think I’d originally intended to make a different tee, and so I didn’t have quite enough yardage to make this one. However, as it was only 1″ shorter and I knew from the sleeveless version that it was a good length as drafted, I figured I could probably get away with it.

Stripe matching was aided by the fact I can see through my cross and dot paper just enough when the stripes are high contrast. The crosses and dots really help keep the fabric lined up across the whole piece, which is great when dealing with a shifty, slinky viscose knit. 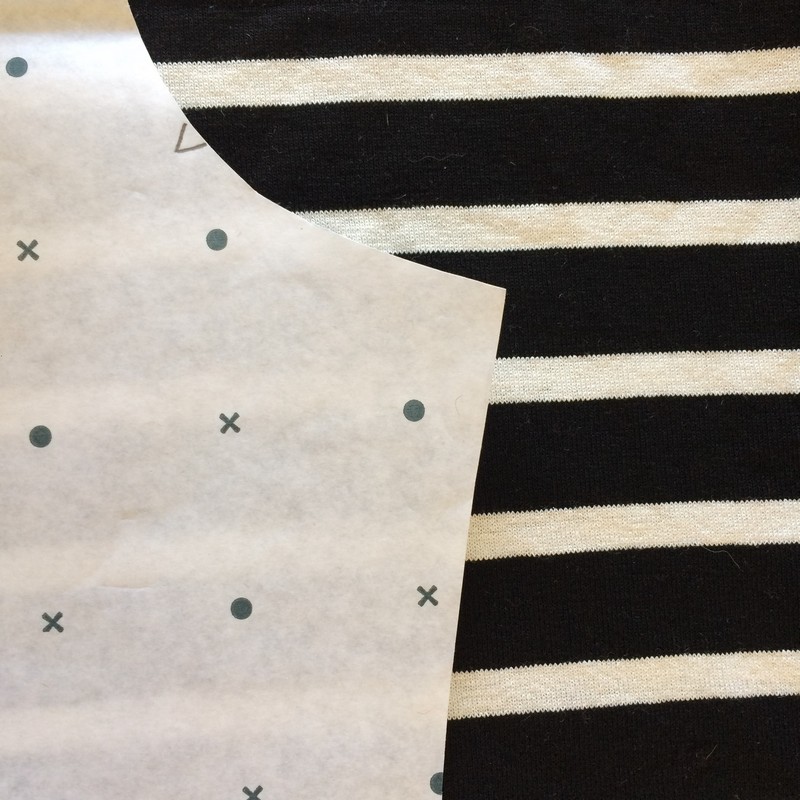 I had the strange gathering of the shoulder seams with the clear elastic, same as the dress version. However, I kept them on this version as it looks kind of intentional. Maybe. Either that or I’m just lazy!

I had one small issue with the pattern instructions for this top. The illustration for sewing in the cap sleeve shows it sewn in the wrong way, with the straight hem side seamed rather than the curved side. Hopefully it shouldn’t fool anyone as the pattern notches are on the curved side, but it did puzzle me for a second.

I tried on the top before adding the binding and the armholes, even with the seam allowance trimmed below the cap sleeve, were still too tight for my liking. I decided to scoop them a whole 1″ lower at the bottom before binding. For a moment I thought I’d done it much too low (oops!) but the binding helped to pull them up a bit more.

Unlike the maxi dress version I didn’t need to stabilise the neckline for this, as this fabric wasn’t prone to stretching out of shape. I did, however, use a scrap of fusible knit interfacing behind the pleats–ironed on after pinning them in shape, so I could completely remove the pins before topstitching.

After deciding on the overlocker narrow rolled hem for the dress I decided to give it a try with this top (it had similar issues of looking an utter mess when hemming with a zig zag), going for white thread. I’m pleased this helped add a bit of the missing length back in as it’s much more narrow than the standard hem. I think I probably should have used black thread instead of white, but it looks fine really.

Time taken: 2 hours 14 minutes (not including cutting out)

I’ve been wearing this top loads since I made it, and I’m happy to say that while there’s a minor bit of bobbling on the fabric, it’s staying in remarkably good shape. I was a little worried that the fabric might not be right for this pattern–too fluid and drapey and not good enough recovery for a form fitting shape like this. However, it looks good on and feels incredibly comfortable. The hem finish isn’t the most elegant but I can always hem it properly (with the aid of some knit interfacing to stabilise it) in the future if this starts to bother me. For now, though, I’m perfectly happy with it.

The thing I’m most proud of with this make is my handling of the stripes. Despite being restricted by having such a small cut of fabric, I managed to get a really good result. I’m particularly pleased with my stripey binding and how I got it lined up at the centre front. I also really love the way the front pleats are lined up with the stripes, emphasising this feature.

I’ve not had a cap-sleeve top in my wardrobe for years and it’s something I didn’t realise I was missing until now. It’s the perfect summer sleeve length, protecting my shoulders from the sun but allowing enough air circulation under my arms to keep me cool. In the past I was put off cap sleeves because they tended to cut right through my tattoo. This one is such a high cap sleeve that you get most of the tattoo on view still, so that’s a big improvement for me. 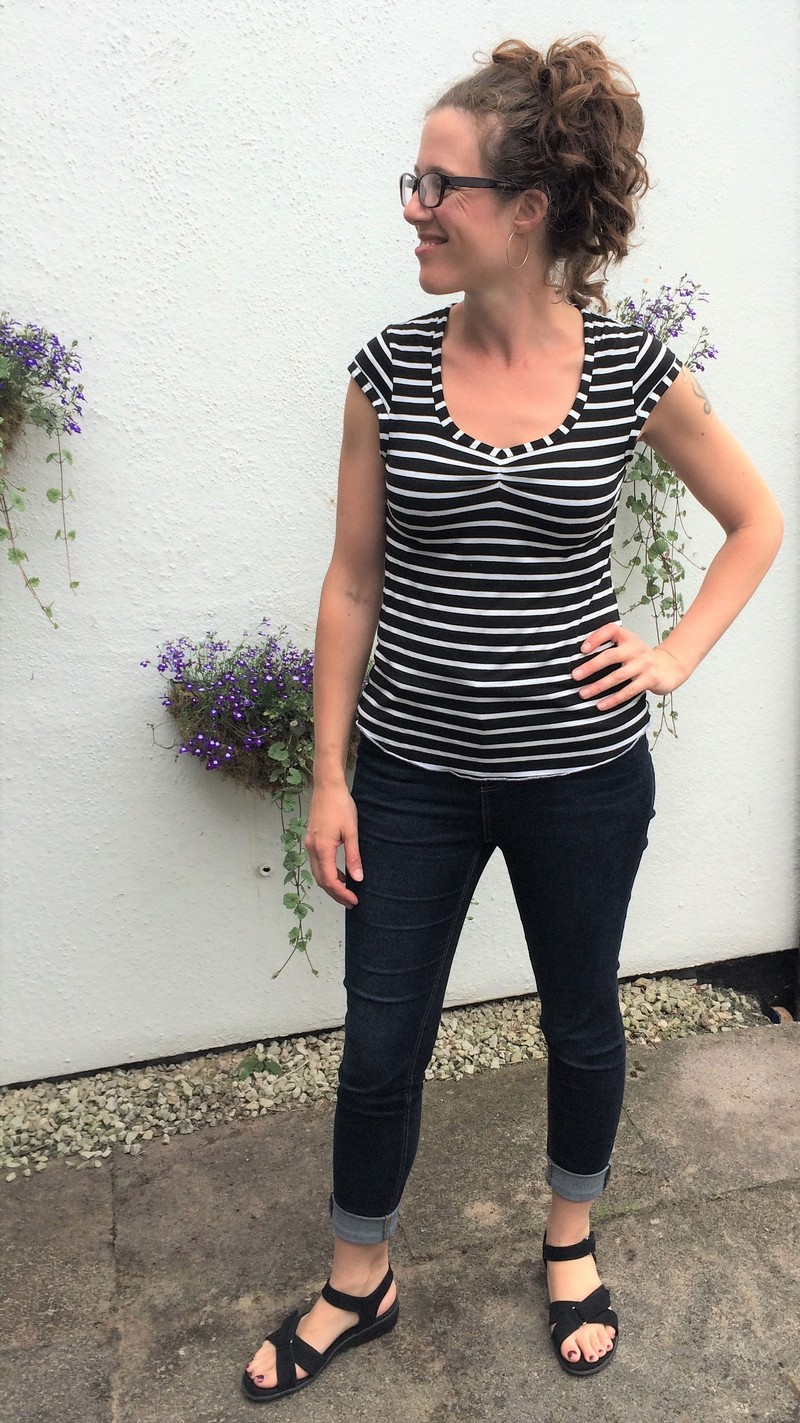 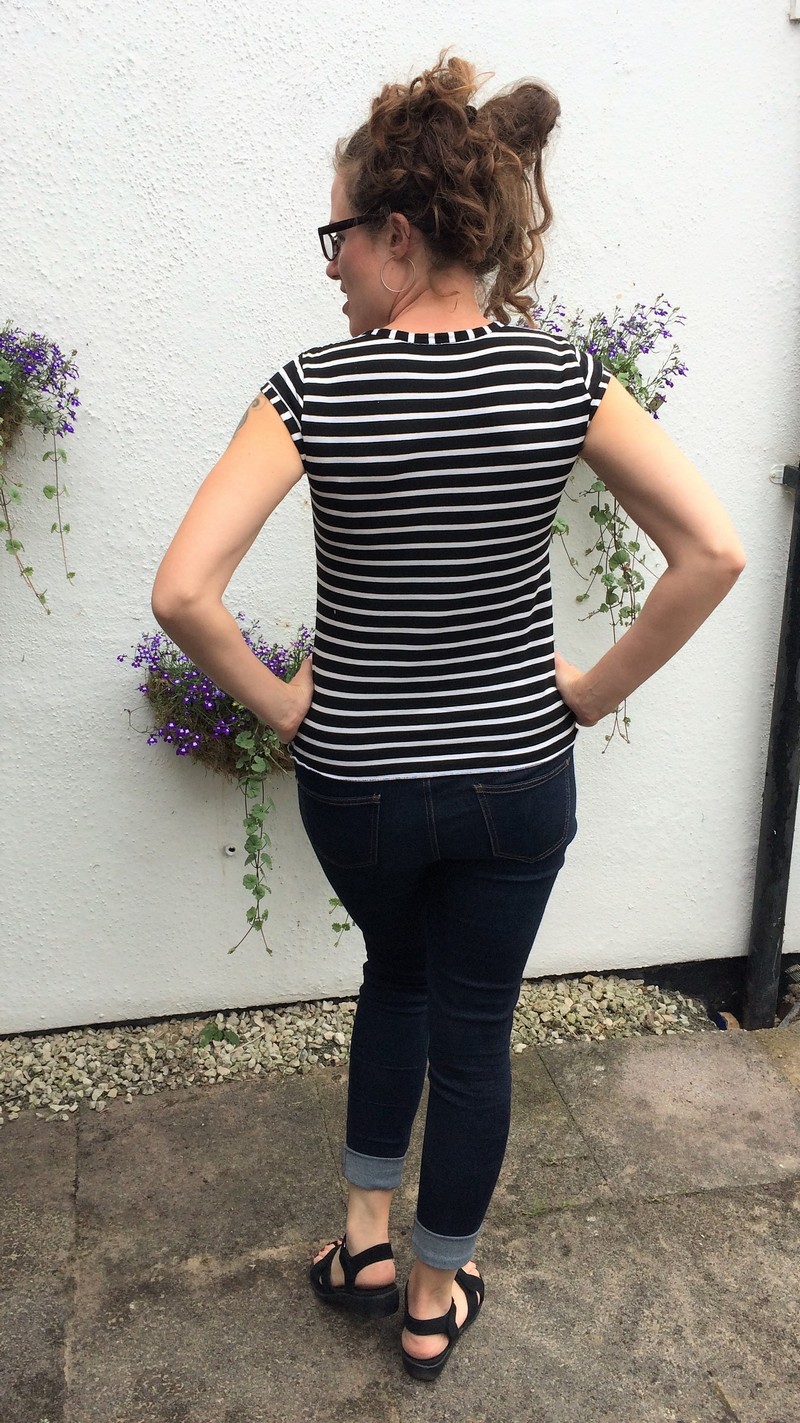 And check out the pattern matching on the side seams! 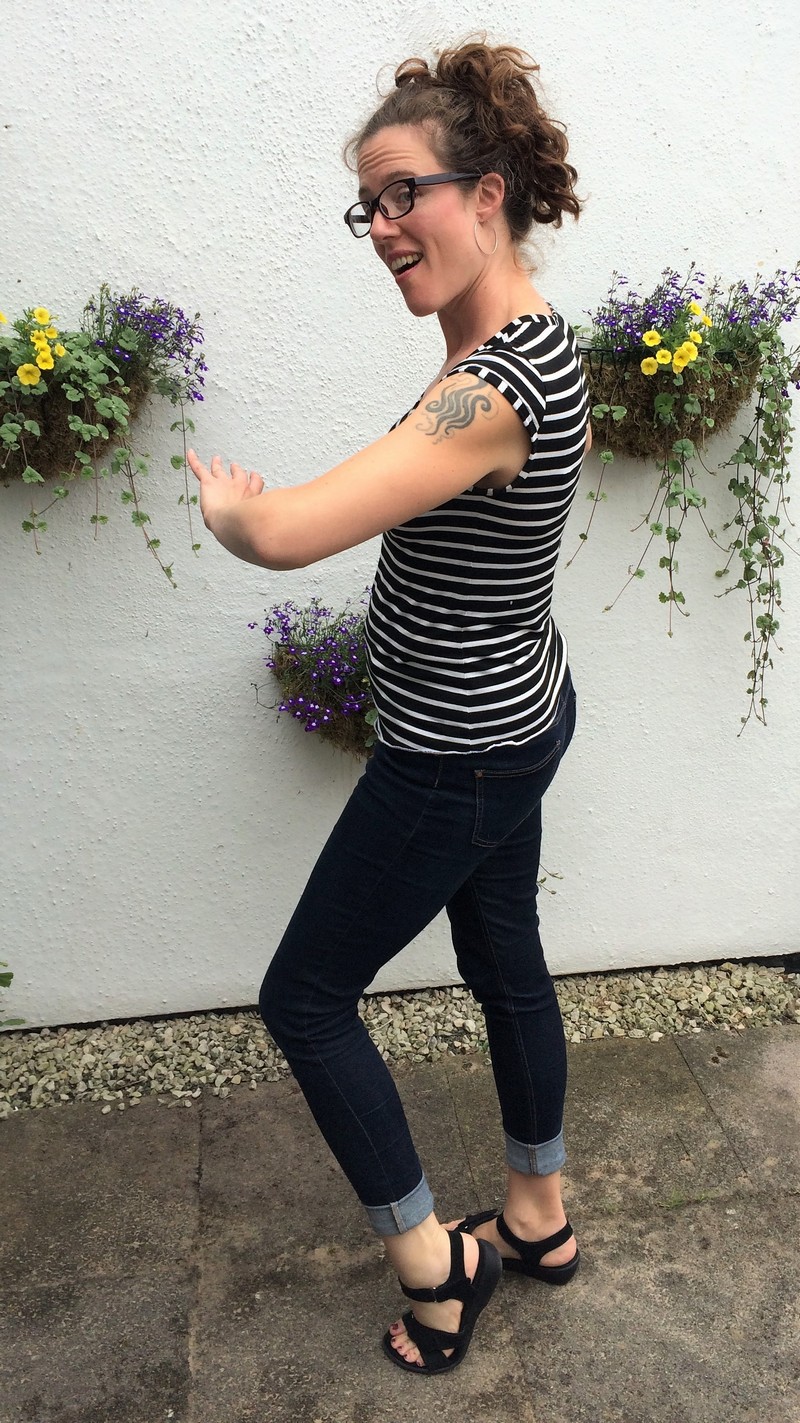 Before making this again I need to trace out the bodice for this pattern with altered armholes for sleeveless and cap sleeved versions, and reducing the seam allowance down to 6mm for the overlocker. I might also make the armhole slightly less scooped than in this version as I think it’s maybe a touch too large. I love this pattern so much I think I might even trace it onto something more durable than pattern paper! Other than that I don’t think there are any changes I need to make, but I definitely want to try a version with proper long sleeves soon. Maybe when the weather cools down…

Based on the book

Clear elastic, knit interfacing and thread all from stash.

That is a total and absolute bargain! Even at the full price! There’s no way you could get a top of this quality at that price point in the shops.

And just for laughs, the worst of the pics from the shoot:

Anyone else a lover of the striped tee? And have you found a t-shirt pattern you love as much as I love this one?

Disclaimer: some of the products linked above use affiliate links, meaning if you follow the link and make a purchase I will receive a small referral fee (at no added cost to you). Any extra income to help fund my sewing habit is greatly appreciated, but rest assured I only recommend products I love and think you might find useful too 🙂

4 thoughts on “The Striped Sweetheart Tee”