Things might have been quiet on the blog, but that’s more down to having computer issues than me not being crafty! I am currently dictating this post into my phone as the PC is still misbehaving. Thankfully Andy ordered us a new one last night, so hopefully I will be back on the blog more often in future 🙂

This year I decided I wanted to make more of my Christmas presents again, and went the sewing rather than my customary knitting and crochet route for a fair few of them. First up is the one I’m most proud of, mainly because I’ve had it in my head to make for my friend for several years now. It’s a cushion featuring her favourite TV detective, Colombo! I used Dylon Image Maker to transfer a black-and-white laserprinted picture of Columbo that I found online. It was simple enough to do, and the only real difficulty is the number of times you have to wet and gently scrape off the paper residue; definitely more than the two times they suggest on the packet. I had originally intended to put the pom-poms as trim around the edge of the cushion and piece the front with a mitred border, as well as inserting a zip closure, but the image making took longer than expected and I had to cut some corners. The cushion is now a simple envelope design, and I used the pom-pom trim to cover the less-than-perfect edges of the Columbo appliqué. My friend was thrilled, and the cushion now resides on her computer chair.

I don’t have any photographs of the remaining three sewn Christmas presents, but they were just simple infinity scarves made out of knit fabrics. I made one in a patterned move Jersey for my mum, and my sisters got theirs in stretch velvet. I have certainly seen my mum wearing hers several times since, and I think they were appreciated by my sisters. I reckon I should make myself one next as the velvet looked amazing!

Since Christmas I’ve had a really busy sewing month and have made (or mostly made) four garments for me. First was a Grainline Hemlock tee, although I’m sad to say this is a total wadder. I’ll be posting more about that soon, once I’ve got some pics of me wearing the offending article. For now, there’s a flat shot (that pattern piece lying over it is for the Deer and Doe Plantain tee, a pattern I know fits me nicely)

After that disaster I forged ahead with the Wembley Cardigan (already blogged) which was at least a partial success in itself, and a great toile. I definitely need a different fabric next time, though.

I then tried again to make a wearable toile of a new-to-me pattern, the Colette Moneta dress (right), out of the same cotton interlock as the Wembley cardie (albeit in a different colour). I made it up just in time to wear for my Dad’s “Surprise” 70th Birthday Party and I love the dress, although I plan to make a couple of modifications before I consider it properly finished. Will blog about that one in the next couple of weeks (I hope).

And I’m also working on another purple-ish dress, but more about that at the end of this post!

I crocheted up a few fairly quick Christmas presents. First up was a hat for my friend Ian, which strictly speaking wasn’t a Christmas present but a birthday present, as he has his birthday on the 25th December, poor love. Ian enjoys some fairly random, kitschy things so I thought a shark hat would be perfect for him. I don’t know if Ian will ever wear it, but he has it adorning the headrest of the passenger seat of his beloved “ratted” car, so I’m happy it’s being appreciated 🙂 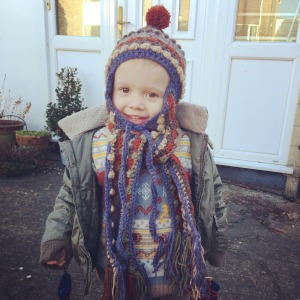 Gabriel was also in need of a winter hat, so I decided to make a pattern I’d made for Daisy when she was little, using yarn from the stash. Only problem was, despite getting the right tension I still ended up making a hat that was way too big for him. I thought I might get away with it until I tried it on Andy and realised I had indeed made an adult sized hat. Never mind, I just started again for Gabriel, following the baby size rather than the toddler one, and now father and son have matching hats! I also made Gabriel a matching scarf, but not Andy because there really weren’t enough hours in the day to crochet a man-sized scarf. As it was I finished these on Boxing Day. Oops!

I thought Daisy deserved a handmade Christmas present too, since I was making them for the rest of the family. For her I made another project that I’ve had in mind for years: a crocheted flower scarf. It came out as much more of a skinny scarf than I’d envisaged, but that means she’ll be able to wear it in warmer weather so that’s fine. That picture, taken on Boxing Day, is the best one I have of the scarf so far because setting up photo shoots with her outside is just too much like hard work in the winter #lazybloggerislazy

I started knitting a sock back before Christmas intending it to be a present for my sister. Well, okay, I intended to knit two of them for her–I’m thoughtful like that! However, I soon realised the pair was never going to be finished in time and so I decided I would finish them for myself. They are in a yarn from my stash that knits up into something that looks a little bit like an animal print. It’s my first time knitting socks with fingering weight yarn, and it’s certainly very slow going. I am still only half way down the foot of stock number one!

At the moment I’m on a slow cooker bender, after being given one by a friend. We were discussing decluttering and she told me the only thing she had in her kitchen that she didn’t use was a slow cooker. I told her I’d been wanting one for a while, and the rest is history 🙂 I’ve used it to make curries, chillies, stews, jerk chicken, and best of all, chicken stock from all the bits leftover from a roast dinner. I’m aiming to make one new slow cooker recipe every week, and have a new book to choose them from. This week I’ll be trying pulled barbeque pork. Delicious… we hope. 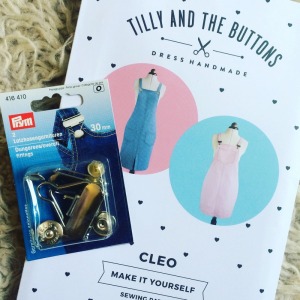 That purple-ish dress I mentioned earlier? That’s a Tilly and the Buttons Cleo dress in aubergine corduroy. Yeah, I know every sewing blogger in the world has now made this dress, but I’ve been wanting a dungaree dress for ages, and the corduroy has been in my stash for years. I’m now just a topstitched hem away from completion, so I should be wearing it tomorrow with any luck. Photos and a blog post next week, I hope 🙂

Next in the sewing queue is either an Aster shirt with short sleeves–a bit summery, perhaps, but it would fit for one of the challenges I’m taking part in this year–or a Moneta version 2 (just need to buy the fabric–also a challenge entry), or perhaps a dress for Daisy (either a simple jersey slip dress or a pinafore style school dress), which would be another challenge entry. Go me with the sewing challenges!

Although the project that might completely jump the queue is a simple t-shirt to wear under my Cleo dress, so that I can show it off on our trip to Madrid next week. I have some gorgeous wool jersey that should be absolutely perfect. The burning question is, which pattern do I use…

So, I’m feeling like I’ve had a really busy and productive couple of months making plenty of time for sewing and crafting. I’ve realised that it’s something that I need to do every day, if possible, to keep me feeling happy. Making things is definitely helping to combat the winter blues. Anyone else find that helps?

Oh, and if you know of any great fabric shops in Madrid, please let me know